Testing the effectiveness of alchemistic essences

In the writings of Paracelsus and many other European, Indian and also Chinese alchemists, one can find numerous descriptions, sounding rather wild to modern ears, of the effects of these essences – in regard to their medical properties, but also to their long-term influence upon spiritual development.

For instance Paracelsus (1493-1541), the famous German alchemist and physician, was enthusiastic about the gold essence „Aurum Potabile“: „Of all Elixirs, Gold is supreme and the most important for us, because it can keep the body indestructible. Drinkable gold will cure all illnesses, it renews and restores.“

Reports written by Chinese alchemists are even older. About 250 years after the first Chinese description of alchemistic drinkable gold, the Tsan Tung Chi from 142 A.D. states that through its ingestion Chinese alchemists had acquired an imperishable “diamond body”. For that reason they were called “The Eight Immortals”.

That all this hasn’t sprung from the minds of some eccentric alchemists is proved by the practical experience of many therapists and also by the pioneering investigations done by alternative researchers. With the help of new kinds of diagnostic equipment, the effects of “Aurum Potabile” have been investigated in recent years by the German LIFE TEST Institute, an independent private institute dedicated to biophysical research. Three research methods were employed:

a special type of Kirlian photography;

All test results confirm that alchemistic essences do indeed harmonize and stimulate the human energy system in extraordinary ways and have an energetic and mental potency that otherwise can only be reached by very experienced meditators or skilled therapists. The following topics have been researched so far:

The effects of Gem Essences

The effects of the Gold Essence “Aurum Potabile”

Blood diagnosis: Effects of the Silver and Gold Essence

In ancient India and in the Ayurveda, Jewel Essences produced in alchemistic fashion were called “medicine of the Maharajas”. They were alleged to have highly surprising therapeutic as well as spiritual effects. Tests at the LIFE TEST Institute have shown that indeed they are well suitable for energetic harmonization and stimulation. Read more...

The effects of the Gold Essence “Aurum Potabile”:

The drinking-gold of the alchemists

In the Middle Ages, “aurum potabile” was regarded as a mysterious panacea about which even Paracelsus was enthusiastic. Now it has become possible to produce this “drinking-gold of the alchemists” in faithful accordance with the ancient recipes. Tests by the LIFE TEST Institute showed surprising energetic effects. Read more...

Blood diagnosis: Effects of the Silver and Gold Essence:

In medieval alchemistic medicine "High Arcana" was the name of the supreme medicines that were won by a special process of dissolution of metals and precious stones. In specific blood tests the effects of one of the most famous them, the gold essence „Aurum Potabile“, and of the silver essence have now been analysed. Read more...

Kirlian photo of a drop of Gold Essence (top), Silver Essence (middle) and Pearl (bottom). The different signatures of the essences are distinctly visible: Gold with a strong, concentrating, but also very harmonious energy; Silver with an opening and dissolving energy; and Pearl with an energy that is also strong but at the same time polarizing (bright spots in ring) 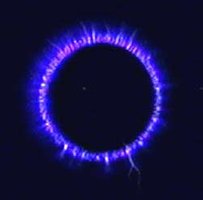 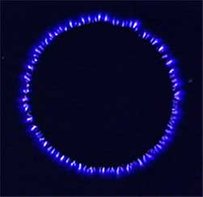 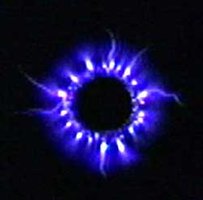 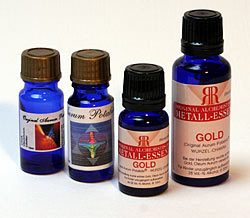 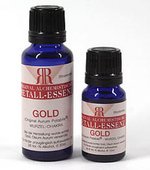 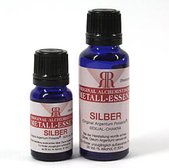