The Application for mind and spirituality

Alchemistic essences can actually stimulate and harmonize the human energy system in highly unusual ways. This has been documented in research done with the help of “HFS-Kirlian-Fotografie” (High Frequency Instant Imaging), a method developed from electric photography.

If the energy system of a person has been successfully harmonized and stimulated, in High Frequency Instant Imaging there is a special energetic pattern: the so-called “energetic finger halo”.

In the course of several years, over 500 test persons practicing all kinds of spiritual techniques like different forms of meditation, Qi Gong, mudras or Reiki, have undergone High Frequency Instant Imaging. Whenever a meditation or technique was especially intense or profound this phenomenon occurred. What happens is that in the High Frequency Image the small halos of radiation around the fingertips, which are normally separate, begin to connect and form one united halo of energy. The inventor of High Frequency Instant Imaging, Hans-Christian Seidl, interprets this phenomenon as the activity of a higher level of regulation which is even above the level of meridian energies and chakras. Therefore he regards the complete unification of the “energetic finger halo” as a new and far more powerful kind of “operating system” for the human energy system, a kind of synchronization of energy on a far higher level than before.

Exactly this phenomenon occurs in regard to the use of high alchemistic essences. With each application the energy system is strengthened in this way, which means there is an effect that normally is only attained through skilful meditation or highly successful energetic treatment. After a certain period depending on the individual, usually between 30 minutes and 3 hours, the energy system relapses into its accustomed pattern. New stimulation is needed – a meditator would have to go back to meditation, a therapist give another treatment. It is obvious that with the help of alchemistic essences such a repeated stimulation of the energy system is much easier and simpler. The claims of the ancient alchemists that through the daily use of these elixirs, for instance in the form of a „Wochenkur“ (weekly treatment course), human beings can be profoundly “lightened” is corroborated by these initial test results. Moreover, the development of one’s personality and awareness that is connected with attaining the Rubedo phase becomes plausible through High Frequency Instant Imaging: The merging of separate finger halos into one big unified halo always starts at special points which according to Kirlian diagnosis are related to certain organs, glands or energy circulation systems. In addition, these “organ spots” are related to certain emotional and psychological themes. The sequence in which the separate finger halos connect is the same for every person, which means that the sequence of these themes in life is also the same for every person. Only when these archetypal biographical themes have been worked through and clarified will the energetic connection of the finger halo remain stable and not dissolve again.

The first biographical theme needing such clarification are relationships in the widest sense of the word, meaning not only love relationships, but also teams, family etc. In the course of establishing the respective energetic bridge, the liver and the kidneys can be temporarily affected by energetic phenomena.

Love and the ability to love is the second archetypal theme, meaning relationships on a higher level and the integration of heart and “gut-level” feelings. In the process, energetic pressure in the abdominal region can increase, affecting the pancreas.

Volition and volitional action in harmony with feeling and heart is the third theme.

Spirituality, orienting one’s awareness towards higher mental goals and integrating feeling, thought and action in the context of such a higher spiritual goal is the fourth step of development.

To maintain joy, ease and bliss with every step on this “Path of the Grail” is the last and most difficult phase in one’s development.

In a striking way, this sequence of developmental phases is similar to the themes on the alchemist’s path from the Nigredo to the Rubedo phase. Like Percival in the alchemistic legend of the Grail, who can only find the Grail and see its light after having purified his heart, a human being can only uplift his vibration to the Rubedo level in the “Great Work” of alchemy if he succeeds in thoroughly purifying his heart. The willingness to face subconscious and repressed problems and thereby dissolving the blockages connected with them is essential for the development of one’s personality and awareness. In this respect the high essences of jewels and metals can also assist a person in recognizing, accepting and letting go of their subconscious tendencies. And they can supply the energy that is needed to take these steps. Still, a person must be willing to always take the next step on the “Path of the Grail”.

In the energy field of the hand there is an energy vortex around each finger. These vortexes can merge into one big system of vibration – the so-called „energetic finger halo“. Although up to now it has only been observed in connection with certain meditations or energetic therapies, about two years ago its initial stages began to occur spontaneously with very many people. In Seidl’s interpretation the surprising increase of the phenomenon represents an “external evolutionary pressure” prompting people towards a development of awareness. The reason for his assumption: Only when certain archetypal life-themes are being worked through will the energetic connection associated with it remain stable. The result, Seidl says, is a synchronization of human energy on a remarkably higher level than before.

Connection 1 between the middle and ring fingers is usually the first one to form. In that process kidneys and liver have to bear an increased energetic pressure. This first coupling of finger vortexes is associated with the archetypal theme of the development of partnership.

The second step in the formation of the halo is the integration of the little finger (2) and with it, the heart. In that process there is increasing energetic pressure in the belly, affecting the pancreas. The theme to be worked on is one’s ability to love.

The connection between the little finger and the thumb (4) requires the development of one’s spiritual mind.

The bridge between the thumb and the index finger (3) is associated with the development of will-power, and the connection between index and middle finger (5) with joy.

When these connections form, unfamiliar perceptions and sensations can occur as well as physical disorders. Typical phenomena: sensations of heat or fullness, impaired vision, pressure on the breastbone, tingling or burning in the arms and legs, temporary aura-vision, precognition of impending encounters, hearing of voices or sounds, and also a recurring ebb and flow of all these symptoms. 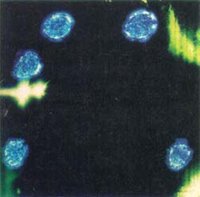 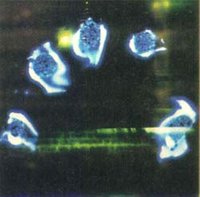 shortly after treatment, the finger halos open up 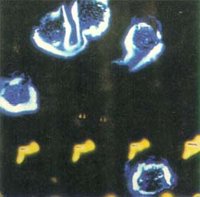 ten minutes later, two of the finger halos have connected