Blood diagnosis: Effects of the Silver and Gold Essence

In medieval alchemistic medicine "High Arcana" was the name of the supreme medicines that were won by a special process of dissolution of metals and precious stones. In specific blood tests the effects of one of the most famous them, the gold essence „Aurum Potabile“, and of the silver essence have now been analysed.

Since the year 2000, for the first time in centuries, the „High Arcana“, an alchemistic treasure of healing, have been available again under the plain names of „Metal Essence Gold“ and „Metal Essence Silver“

After very good results obtained in a meridian energy test as well as in biophoton analysis and Kirlian photography (see pertinent test report), „ Aurum Potabile“, that essence won from pure gold, and an essence won from silver in the same way, were subjected to further testing in regard to their effects on humans. For that purpose several medical blood tests were employed that were conducted by the German company „Cytomed“ in Baden- Baden, a laboratory specializing in blood cell analysis, environmental analysis and clinical chemistry. This comprehensive blood diagnosis is comprised of the following tests:

1. Phase Contrast Darkfield Microscopy and Photometry: Determination of Somatidian Cycle and of damage to red blood cells according to Prof Enderlein and Dr Brehmer (University of Berlin)

7. Analysis of enzyme defects (Cancer cell sickness) through comprehensive diagnosis according to Prof Wrba (University of Vienna): conclusions in regard to enzymatic blocks and basic metabolic disorders

9. Urine testing with Combur 9 quick test: Determination of leukocytes and other immune marker substances, conclusions in regard to toxin excretion

11. Urine testing through Overlay Reaction according to Prof Herget: Determination of protein deposits in urine; conclusions in regard to organ disorders, immunodeficiencies, cell defects and the actual biological age as indication of aging process in general

Test persons (male and female) each received 36 drops of Gold Essence in a three-percent dilution in two tablespoons of water once a day on three consecutive days. Patients were suffering from severe neuralgic trouble, migraines, muscular pain, fibromyalgy or disorders of the rheumatic family.

Results: All patients showed distinctive improvement of their condition even after just three days of treatment. Their overall blood-pictures showed numerous positive changes, accompanied by a significant reduction of internalized environmental pollutants and harmful metabolic wastes in blood and urine. Flow rates in and thus all functions of the ground substance (the connective tissue as main agent of all the important basic control processes and central field of metabolic control) were influenced positively. This means that a quite thorough detoxification and discharge of toxins was effected. Apart from their individual diagnosis, the status of red blood cells (test #1), environmental toxin loads in urine (tests # 9, 10) and flow rates in the basic substance (test # 4) improved with all patients. Moreover, there was an improvement of enzyme status with all patients – showing in clinical laboratory data (8) or in analysis of enzyme defects according to Prof Wrba (test # 7). In addition, neuralgic conditions improved in regard to cell respiration and metabolism (2) as well as in regard to stress through alien proteins and chronic inflammation processes (5).

Each test person received 40 drops of Silver Essence in a three-percent dilution in two tablespoons of water once a day on three consecutive days.

Patients were suffering from cancerous diseases, e.g. breast cancer (mastocarcinoma) or carcinoma of the prostate and were undergoing chemotherapy or follow-up treatment after operation or chemotherapy. Their blood and immune status were in very bad shape.

Results: Here as well, all patients showed a marked improvement of their condition even after three days’ application. Their overall blood pictures also displayed numerous positive changes, and stress through internalized environmental pollutants, alien proteins and harmful metabolic wastes was likewise reduced significantly. Flow rates in and thus all functions of the ground substance (the connective tissue as main agent of all the important basic control processes and central field of metabolic control) were influenced positively. So here also a quite thorough detoxification and discharge of toxins was effected.

With all patients there was an improvement of red blood cells (test # 1) and of flow rates in the ground substance (4). Patients with breast cancer showed different kinds of improvement in regard to detoxification and regulation processes: With some, a reduction of environmental pollutant loads could be demonstrated through urine testing (9, 10 and 11), with others through cell phase analysis according to Dr Reckeweg (3). There were also other individual differences, some patients reacting with improved cell respiration and energy metabolism (2), others with improved enzyme status. All breast cancer patients, however, showed the same improvement in buffer action against free radicals (6), improvement of fibrin and blood protein structures and thus an improvement of their metabolism and immune status (6). Moreover, the treatment of carcinoma of the prostate with Silver Essence could be demonstrated through urine testing to reduce environmental pollutant loads (9 and 10). 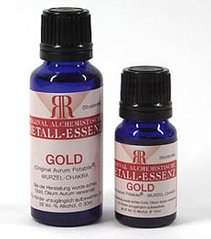 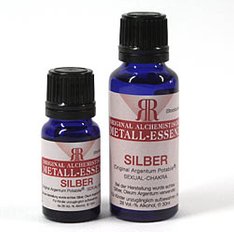 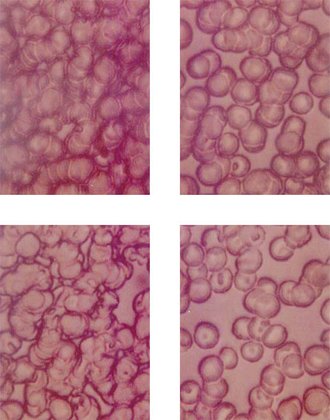 Top row: Patient with neuralgia and migraine; middle row: Patient with neuralgia and muscular pain – pictures on the left (#1) taken before, pictures on the right taken after treatment Immediately one can see a reduction in „rouleaux formation“ or „clotting“ of red blood cells. This improves blood flow parameters and thus the blood’s capacities for transporting oxygen and other loads. It also improves immune status and cell respiration. Risks accompanying cardiac and circulatory disorders are greatly minimized, patients’ vitality increases and their overall well-being is influenced positively. 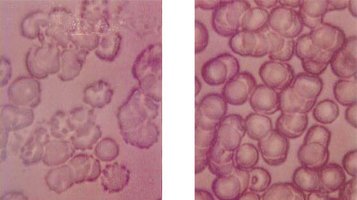 Bottom row: Patient with breast cancer (mastocarcinoma) – on the left (#1) before, on the right after three days’ treatment Silver Essence shows a similar positive effect upon vitality of red blood cells, i.e., dissolution of rouleaux formation. In addition, with Silver Essence a strong positive effect in regard to harmful erythrocyte loads of xenobiotic proteins and degenerated bacteria (according to Profs Enderlein/Brehmer, Prof Linke and Dr Scheller) can be seen: these noxious loads manifest as deformed spots on the periphery of red blood cells as well as deposits in or on the blood corpuscles. Even after three days of treatment (picture on the right) the red blood cells show an almost ideal healthy shape, and the deformed spots visible under the microscope have gone almost entirely. This is accompanied by a marked improvement of immune status, cell respiration and of detoxification capacities.

in order to assess fibrin structure and thus damage to blood proteins, stress through free radicals, metabolism disorders (ATP blocks) and immune disorders. From how blood proteins associate and form a network structure it is possible to draw conclusions in regard to how much the body is under stress from free radicals, chronic illness and inflammatory processes. Frequent symptoms that go together with great holes in the fibrin network are cancerous diseases, rheumatic illnesses, auto-immune disorders and arteriosclerosis. 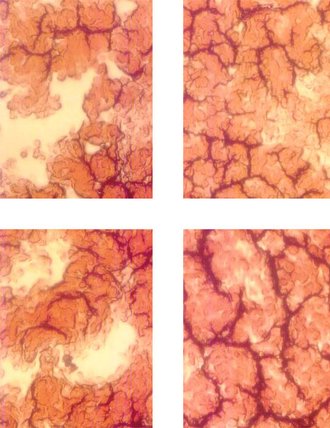 Top row: Patient with fibromyalgy, middle row: patient with fibromyalgy and muscular pain – pictures on the left taken before, pictures on the right taken after three days’ application of Gold Essence. Both patients with fibromyalgy (top: female, below: male) showed great damages to fibrin protein structures (pictures on the left). Even after just three days of treatment these have become significantly smaller. This is an indication of increased excretion of environmental pollutants, increased buffer action against free radicals, better regulation of metabolism and immune system and of improved blood vitality. The process of chronic disease is clearly easing off. 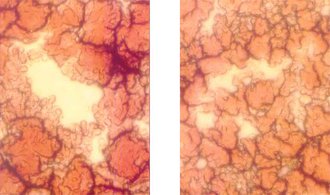 The positive effects of Gold and Silver Essences upon the blood and all circulation and detoxification processes are marked and rather amazing given the short application periods. There was similar success with treatment of cancer and fibromyalgy patients.

Recommended daily dosages of 5 to 10 drops of each essence were increased three to four times, though, which boosted all healing processes accordingly.

Given these test results, the LIFE TEST Institute rates the energetic Gold and Silver Essences as: 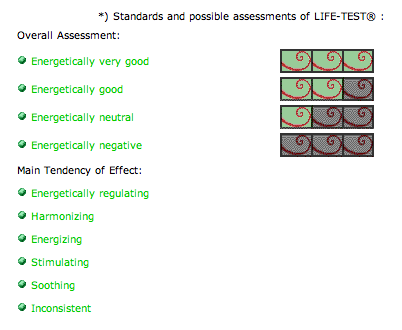