The effects of the Gold Essence “Aurum Potabile”: The drinking-gold of the alchemists

In the Middle Ages, “aurum potabile” was regarded as a mysterious panacea about which even Paracelsus was enthusiastic. Now it has become possible to produce this “drinking-gold of the alchemists” in faithful accordance with the ancient recipes. Tests by the LIFE TEST Institute showed surprising energetic effects.

Inconspicuous liquid: From pure gold, in the course of an alchemistic process that takes months, an essence develops which, strangely, no longer contains any gold

Medical texts from the Middle Ages talk about veritable miracle cures due to a mysterious essence distilled from pure gold: the “aurum potabile”. Orthodox physicians have always regarded it as fable, not fact – although serious historical sources and famous experts of the time reported unusual treatment successes after the ingestion of the “aurum”. Recently, modern alchemists have finally succeeded in producing the mysterious tincture.

In the course of a process that takes months, pure gold becomes a liquid which, amazingly, contains no trace of gold and therefore is absolutely non-toxic. Actually, the process may strike modern chemical engineers as rather odd: The gold is being ground down, fermented with liquids, treated with acids and distilled over and over. The remains are burned to ashes, soluble parts are washed out and distilled again together with the rest of the liquid – for months and months and in strict accordance with the rhythms of the sun and the moon. What is amazing: During this process there are precisely those hues and changes of the “gold soup” that alchemists have always described in their cryptic symbolic writings, the manufacturers allege.

According to the manufacturer’s specifications, the final product chemically consists of pure alcohol. Still, it is alleged to contain a “very highly transformed information” of gold. So, the ancient scholars were apparently right with their descriptions how to go about producing the “drinking-gold”, but how about their enthusiasm in regard to its effects? Independent tests commissioned by the LIFE TEST Institute were meant to give some indication.

Close-up of a production vessel:

During the production process there is the occurrence of light phenomena which cannot be explained by orthodox physics. Similar blue light phenomena were reported by: Wilhelm Reich during his investigations into orgon energy and the creation of live germs; Viktor Schauberger during his experiments with thin jets of water that charged the surrounding air

Measurements were conducted in the following areas:

2st: Meridian energies (through measurements of skin resistance by means of a “Prognos” apparatus)

Biophoton analysis is conducted by the laboratory of biophoton discoverer Dr. Fritz-Albert Popp in accordance with the double-blind standard. Meanwhile, biophoton measurements are employed at over 30 universities world-wide.

Measurements of meridian energy were conducted by the German "Gesellschaft für Energie-und Informations-Medizin" (Society for Energy and Information Medicine), Dr. Manfred Doepp. The reliability of this method has been established in a study at a German university. In Russia, the method is an officially acknowledged medical procedure.

High Frequency Instant Imaging was conducted by the "Institut für Hochfrequenz-Fotografie. Lehrinstitut H.C.S. Medizintechnik" (Institute for High Frequency Imaging – H.C.S. Medical Technology Training Institute). This form of electric Kirlian photography is not officially acknowledged as yet, but has a long-established background of experiential data.

After an initial stage, three similar bottles were filled successively with water from the same source. With a standardized pipette, five drops of Aurum Potabile were added to the first container, and five drops of a chemically identical alcohol to the second container. The third container received 105 drops of the Gold Essence. The question was whether Aurum Potabile actually has biophysical properties that are different from a chemically identical reference substance.

The test results were unmistakable: The “drinking-gold of the alchemists” showed a biophoton emission that was about 43 per cent higher than the reference sample. With the third sample whose 105 gold drops represented an increased concentration of 2100 per cent, biophoton emission increased to an average of 120 per cent. “Golden alcohol” apparently behaves strangely – and, as lots of biophotons are good for living beings, it should also be healthier than normal liquor. But does that mean it can cure illness? The next tests were intended to answer that question.

16 persons (9 men and 7 women) of different age were tested before and after contact with Aurum Potabile. One person who kept carrying the essence close to the body during daytime was tested several times during a period of 4 months. The tests yielded unusual results: First, test persons did not react in the same positive or negative way to the test substance all the time. The measured dispersion is unusual and seems to represent a dynamic property of the substance. Of the 16 test persons, 9 reacted positively, i.e. with an increase in energy; 6 reacted negatively, i.e. with a decrease in energy; and 1 person reacted neutral. Women tended to show an increase, men tended to show a decrease in energy. In sum the decreases in energy were stronger than the increases, which is remarkable because normally in these tests first there is a change in the energy levels of those meridians that are relevant for regulation and the autonomic nervous system (i.e., the lung, heart, triple heater, and circulation meridians). But this didn’t happen here. Instead the meridians of the abdomen showed significant changes, especially the meridian pair related to kidney/bladder. It is interesting to note that precisely these meridians are traditionally associated with Qi, the Chinese life energy; the bladder reflects production, kidneys reflect the storage of Qi.

Apparently, Aurum Potabile affects production and storage of the life energy Qi in a subtle and precise fashion. The stimulation of these meridians is also associated with the mobilization of subconscious content. The long-term test of amale test person showed a tendency towards an overall energetic improvement.

These results were so unusual that they were subjected to tests with another, completely different, method.

Three test persons were tested before and after contact with Aurum Potabile. For that purpose, High Frequency Instant Imaging of the fingertips of one hand was conducted. Comparison of the images showed that Aurum Potabile caused a marked increase and a concentration of the body’s energies. Especially striking is the prominence of the so-called “energetic finger halo”, which in High Frequency Instant Imaging is regarded as a typical sign of the stimulation of superior levels of regulation. Usually this phenomenon occurs only during states of intense meditation or during other activities of an energetic, psychological or spiritual nature – whenever the structure of the human energy system is strengthened. So the Essence improves energetic order and responsiveness to higher levels of regulation, supporting already existing energetic strengths and promoting the individual disposition. It doesn’t override the typical energetic constellation of a person, but serves it, which is a very positive tendency of effect. The increase of bodily energy is not achieved by a decrease of energy in other areas of the body, which in High Frequency Instant Imaging would be indicated by a loss of image brightness. Instead, there are rare colours like royal blue, turquoise and hues of purple. This is interpreted as a sign of the presence of energies of high vibration, of mental and spiritual powers of awareness which usually occur during meditation. In that perspective the Essence leads to a receptiveness for positive subtle energies of a very high vibrational level or supplies these.

Referring to these results of the energetic tests and on the basis of its internal standards, the LIFE TEST Institute categorizes the alchemistic essences – especially the Rescue Essence – as: 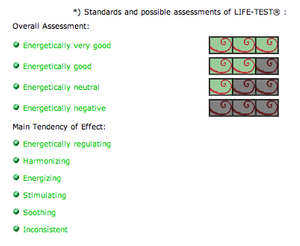 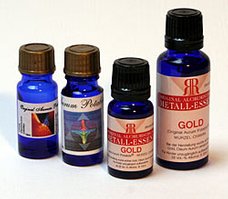 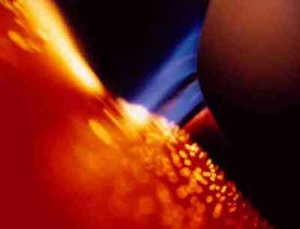