The essences presented here are so-called „High Arcana“ of Alchemy, that is to say, next to the legendary „Philosopher’s Stone“ they are the supreme and most effective essences. Their production only became possible through an alchemistic sensation: the discovery of the „Secret Fires“, the extraordinary solvents that had hitherto been kept strictly secret.

These „Secret Fires“ are capable of dissolving even metals and hardest jewels and only through them it is possible to prepare the three philosophic principles of Sal, Sulphur and Mercurius (which stand for body, soul and spirit respectively) as separate and complete substances and, through that, to use the healing powers of the body, soul and spirit of these metals and jewels. In this preparation of all three healing powers, their purification and uplifting of energy and finally their recombination in a higher unit lies the secret of these essences’ extraordinary healing power.

In comparison, other methods of essence preparation like homeopathy, Bach flower concentrates or alcoholic extracts only transfer a part of the spiritual information (the Mercury principle). The healing powers of a metal’s soul (Sulphur), in chemical terms an oily substance, and its purified body, chemically speaking, the salts, are not included in these essences. Only by employing the Secret Fires can they be prepared from metals and jewels. And this form of processing is a prerequisite for and already a part of the supreme alchemistic undertaking: the „Great Work“.

There are countless scriptures concerned with the „chymical“ processing of minerals and metals. Still, there are only a few scriptures that contain really reliable information. And these have one thing in common: First, they are written in symbolic code language, and, second, they contain incomplete or deliberately misleading information even when they seem to provide clear recipes and laboratory instructions. This mixture of code language, allusions and wrong tracks has in the past led to a deluge of interpretations of alchemistic recipes and texts.

Only recently, at the turn of the millenium, in the autumn of the year 2000, two German alchemists succeeded in deciphering the nature of the secret solvents without which no genuine alchemistic arcana can be prepared, neither in „wet“ nor „dry“ fashion. These solvents are:

„the Secret Salt Fire“ for undertakings on the „dry path“, and

" the „Adepts’ Spirit of Wine“ for the „wet path“ (having nothing to do with common spirit of wine except that it is transparent and volatile and transpires in „veins“ during destillation).

Precisely because these solvents are the basis of any High Alchemy and in particular of Metal Alchemy and the Great Work, in many alchemistic scriptures there is no mention made of them or even a deliberate repression of information. Often the authors referred to them only in symbolic images. With the help of the „Secret Salt Fire“, from certain substances the „prima materia“, a potent primordial substance, is prepared. From that in a second step the „Adepts’ Spirit of Wine“ or „Philosophical Mercury“ is extracted. Only when Spirit of Wine and „Spiritus Mercurii“ have been prepared under great labour can, with their help on the „wet path“, the high essences be extracted from metals and jewels.

So, for instance, in the case of „aurum potabile“, the gold that has been „skilfully prepared“ is being doused with the appropriate solvent, mysteriously losing its colour in the process. The colour passes over to the solvent, leaving behind the gross body of the metal which is whitish in colour like talcum. It cannot be reduced into gold any longer, a fact which also cannot be explained by modern science. In alchemistic terminology, the colour is „the soul“ which has been extracted from „the king“ (i.e., the gold). In this soul the potency and the healing powers, the arcanum of the gold lie hidden. The external body, the remaining matter would only inhibit their development. Great alchemists like Basilius Valentinus and Paracelsus, for example, have always emphasized that in their scriptures.

The metal extract prepared in this way is, after further processing, sweeter than sugar and of balmy fragrance. It has nothing in common with metal colloids, in which the gross metal body is only dispersed in minute particles, which is why metal colloids can form poisonous deposits in the body. Equally, an alchemistic metal extract cannot be compared with acetone or other extracts which, by and large, are not capable to isolate and extract the animated priciples of substances. This is only possible through the supreme alchemistic processing in „dry“ or „wet“ fashion, because the living elements, which are usually ignored by chemistry and also ordinary spagyrics, can only be isolated if the employed solvents and methods do also still possess their living organic vitality, high energy and a connection to the natural living rhythms of the Earth and the planets.

Although metals or jewels can be dissolved by powerful dead acids and lyes, their intrinsic healing powers will be destroyed in that process. So the Salt Fire forms the indispensable basis for the preparation of healing essences and for any High Alchemy.

When heated, from the copper that has been processed to the „Green Lion“ phase, the healing essence, the so-called Arcanum, will arise in deep golden-red colour. The green colour of copper processing turns into red – one of many colour mysteries that happen during alchemistic processes.

During the alchemistic processes, there is the occurrence of light phenomena which cannot be explained by physics. The blue light indicates a charge of life-supporting energy.

This photo shows the energetic structure of the pearl. It was taken during the process of crystallization while producing the essence. 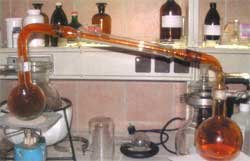 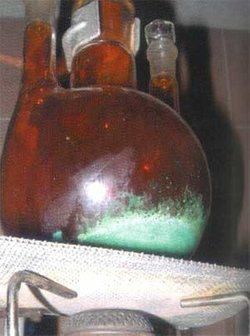 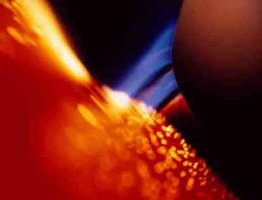 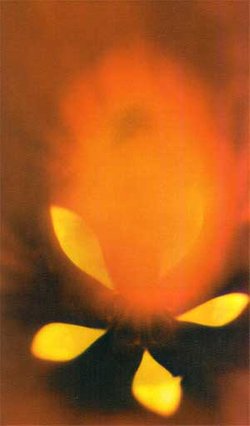